If you haven’t seen it yet please watch the KONY 2012 video. You don’t have to agree with it, or support Invisible Children, but I think everyone should watch it to at least be able to contribute to the conversation.

Some people have responded to the KONY 2012 video (and there are many more but these are the ones that stood out to me):

Invisible Children has responded to their critics in writing and in this video: http://www.youtube.com/watch?v=OQABpjCalJk

And to the response to their KONY 2012 Video:

First I would like to write about Joseph Kony.

Now I think it is one thing to break a law and be punished for it. I think that all laws are debatable. In some countries some laws take away human rights (often specifically relating to freedom in relation to gender and sexuality) so I don’t think the law should be the final word in any situation… however, according to the video, Kony is wanted by the International Criminal Court. According to their website:

The International Criminal Court (ICC), governed by the Rome Statute, is the first permanent, treaty based, international criminal court established to help end impunity for the perpetrators of the most serious crimes of concern to the international community. The ICC is an independent international organisation, and is not part of the United Nations system. Its seat is at The Hague in the Netherlands. Although the Court’s expenses are funded primarily by States Parties, it also receives voluntary contributions from governments, international organisations, individuals, corporations and other entities.

Their website also has an update on what it calls the “Situation in Uganda”:

The case The Prosecutor v. Joseph Kony, Vincent Otti, Okot Odhiambo and Dominic Ongwen is currently being heard before Pre-Trial Chamber II. In this case, five warrants of arrest have been issued against [the] five top members of the Lords Resistance Army (LRA). Following the confirmation of the death of Mr Lukwiya, the proceedings against him have been terminated. The four remaining suspects are still at large.

I think it makes sense that if many countries and their international court agree that someone should go to trial, then it is worth following up on. One thing I have heard some critics of the KONY 2012 video say is that Joseph Kony is evil and should be punished. I disagree. I do not think anyone is evil. I think all beings deserve love and respect and compassion – for if I were to deny these basic things to Joseph Kony, I would only be perpetuating the terrible allegations that have been committed in his name. I am not saying that I agree with his actions, or that I think the acts committed by the LRA should be condoned – however I think it is possible to still love someone, and know that they may have made a mistake or have done wrong.

Secondly I would like to write about the KONY 2012 video itself and some of the allegations and criticisms of it.

I disagree that the video proposes a simple solution, I think that the video presents one step in reaching a goal. Much like other activist campaigns that target small milestones on the road to an end goal (in this case: INVISIBLE CHILDREN USES FILM, CREATIVITY AND SOCIAL ACTION TO END THE USE OF CHILD SOLDIERS IN JOSEPH KONY’S REBEL WAR AND RESTORE LRA-AFFECTED COMMUNITIES IN CENTRAL AFRICA TO PEACE AND PROSPERITY). I love that IC has a very clear and specific goals and I really like the way they are so good at empowering people by giving them a common goal and realistic ways to contribute that everyone can be part of. It’s an interesting experiment on social change. As a North American Citizen, apart from sending US or Canadian military (which are not purely conflict based – I used to be very opposed to anything related to the military but I have learned that they also are a valuable civil service – helping when there are floods or hurricanes etc.. in Canada anyway), I can’t think of any other actions me and my government could take to end this conflict. I don’t think that in itself, tweeting a message, sharing a video or sending an e-mail can end a major world conflict, however I think it is important to make supporters a part of a movement. These small acts of sharing information can contribute to major shifts in priorities and thinking for individuals. I know my life changed the first time I saw a video from Invisible Children (which I found via Pete Wentz btw several years ago). Some people have said the video is creating more war and conflict. I don’t know how to end a war. I don’t know the right answer here. I do know that whatever action has been taken in the past 25 years has not been effective, because there is still a war… so I think a new approach may be necessary. Maybe instead of trying to end war, we should be trying to create peace. Even in this case though, I think the two are very inter-related. I think it will be much easier to create peace when the LRA is disarmed and no longer causing children to do terrible things.

I read many articles calling supporters of KONY 2012 young and idealistic. So? Join the party.

So do i support KONY 2012? I don’t have a problem with spreading information and creating conversations about Joseph Kony. I think the more people that think about the well being of others and the world we are creating the better. Love it, hate it, as long as you are thinking and engaged I think that is extremely valuable. Maybe you think Invisible Children is using the wrong tactics targeting policy makers and celebrities. Maybe you or someone you share the video with will have a better idea of how to create peace. I think that is the power of video, it can inspire other ideas and actions.

And don’t get me wrong, I don’t have a problem with people being critical of the video or of Invisible Children. In fact I love that. I think critical thought, questioning, sharing ideas, and making informed choices. I think if everyone was more critical Kony probably wouldn’t have had enough followers to start and continue to build a child soldier army in the first place. And being critical doesn’t always mean supporting the social justice or “left-wing” side of things. I think being critical is about looking at both sides of an issue and deciding what is right for one’s self. Perhaps education is the way to support critical thinking – perhaps we should support building school in developing countries a la the world’s largest network of children helping children or other groups… but when I reflect on my own life I am not sure that the current school system in most countries supports this. Sitting and learning from a book or a teacher isn’t engaging in critical thought in my opinion. Maybe I should be trying to create the next generation of critical independent researchers…. I really don’t know (nor do I think there is) a “right answer” here.

I do know that my involvement with invisible children (like this, this, this and this) gave me something to belong to. I felt like I was part of something bigger than myself, and I was. I have connected with other people as a result of past work with IC, and on several dark evenings I was not so alone in the world. So I am going to keep creating conversations about Kony. Maybe it will inspire someone to come up with a way to create peace, who knows. Everything is connected.

I have started this post several times and the situation keeps changing almost more quickly than I can keep up with. You may have heard that there are some allegations again Invisible Children founder, Jason Russell. IC released this responce video:

This message was released on behalf on Jason’s Family:

“Thank you to everyone concerned with Jason and his health. Jason has dedicated his adult life to this cause, leading up to KONY 2012. We thought a few thousand people would see the film, but in less than a week, millions of people around the world saw it. While that attention was great for raising awareness about Joseph Kony, it also brought a lot of attention to Jason—and, because of how personal the film is, many of the attacks against it were also very personal, and Jason took them very hard.

Let us say up front- that Jason has never had a substance abuse or drinking problem, and this episode wasn’t caused by either of those things. But yes, he did some irrational things brought on by extreme exhaustion. On our end- the focus remains only on his health, and protecting our family. We’ll take care of Jason, you take care of the work.

The message of the film remains the same: stop at nothing.”

-Jason’s wife on behalf of the Russell Family

I think Jason is human, and I wish him and his family all the best.

TOGETHER WE CAN END THIS WAR! 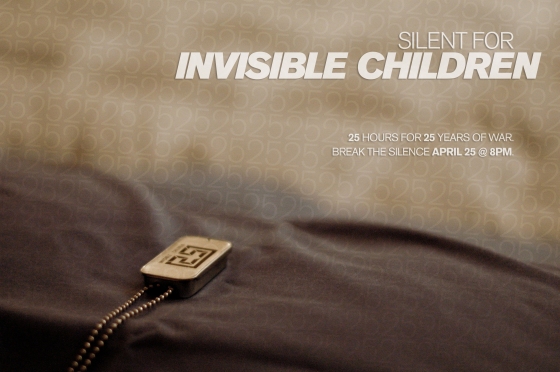 Right now, I am being silent for Invisible Children’s campaign 25. One hour of silence for each of the 25 years of war Central Africa has endured. We can stop this.

As a fairly theatrical person I have observed that I use my body so much more when I cannot use my voice. My gestures, my grunts and laughter, they are all amplified. Silence amps up our other tools for communication. I am grateful for my body and my literacy right now. They are both helping me communicate. I am sad that not everyone has this luxury. That is why I am doing this I suppose.

I am also enjoying listening. Absorbing information from other people and relishing in these moments of thoughtful reflection I am privy to.

One world. One peace.

We are the change. See you in the morning world.

This is what I thought I would be doing in IAT 235: Information Design. Christmas project inspiration? : D